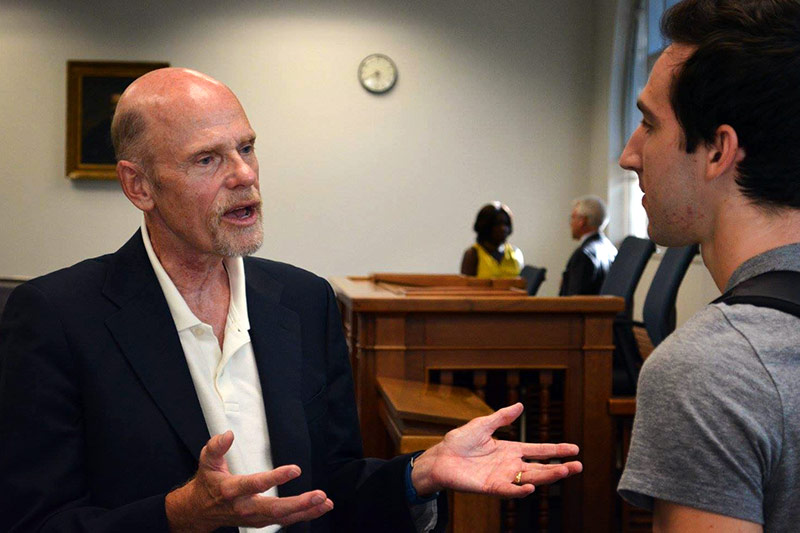 Larry Aldrich (L ’77), left, speaks with a student following a discussion on the future of digital media at the Tulane Law School Monday (Sept. 12). (Photo by Linda Campbell)

In a conversation that ranged from mass publication of the Hulk Hogan sex tape to the public’s right to know about presidential candidates’ medical records, former media attorney and newspaper publisher Larry Aldrich (L ’77) engaged a Tulane Law audience in a lesson on the importance of a free press.

Aldrich, who was senior legal counsel at USA Today publisher Gannett Co. then led two Arizona papers into the digital age, advocated a broad view of the First Amendment, with the press itself deciding what’s “newsworthy.”

Yet, he also argued for a limited definition of “the press,” distinguishing traditional newspapers and broadcast media from self-described “citizen journalists.” The special constitutional privilege enjoyed by the press, Aldrich said, must be exercised by collective bodies of reporters and editors guided by ethical boundaries. Traditional press institutions remain vital to democracy, he said, because they’re committed to the obligations accompanying First Amendment freedom, and they largely are “driving themselves to be truthful.”

As CEO of the Arizona Newspapers group in 1995, Aldrich led The Arizona Daily Star to become the fifth U.S. newspaper to launch a web edition on the internet. He said consumers now are bombarded with information from a multitude of sources that have little care for its veracity.

“The risk to democracy is, there is so much information,” he said, but in many cases “there is no sense that these facts are true.”

Aldrich emphasized that lawyers can play an important role in avoiding further erosion of the press: “What do we do as a society, what do we do as lawyers, to help people be better consumers of information?”

Aldrich currently runs his own consulting firm. In 2014, he and his wife started the Wendy and Larry Aldrich Endowed Scholarship in Legal Entrepreneurship at Tulane Law to assist students aspiring to careers in business innovation.