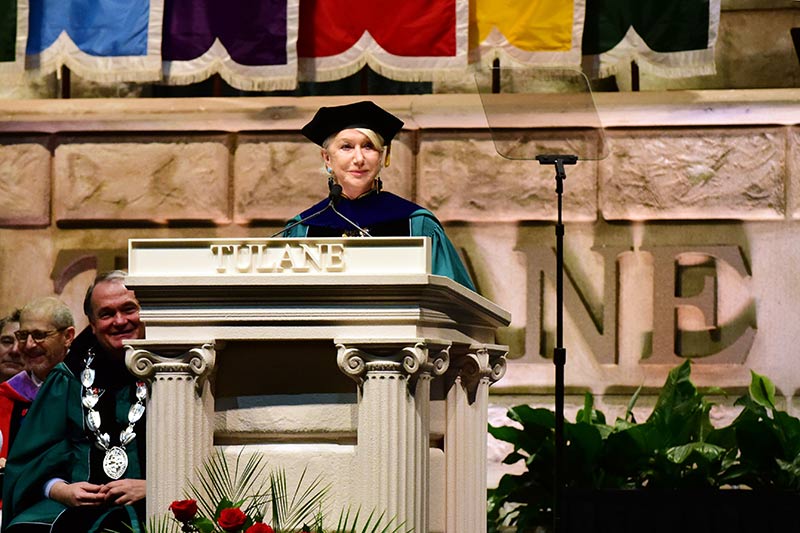 Helen Mirren gives the keynote address at Commencement 2017. Her speech was at times funny, heartwarming and still inspirational, and included "Helen's top five rules for a happy life." (Photo by Cheryl Gerber)

Tulane University President Mike Fitts gave the 2,800 members of the Class of 2017 a commencement speech chock-full of humorous student vernacular. “I don’t understand most of what I’m about to say,” he deadpanned, before referring to them as being “on fleek” (looking great)  and ending up as “fam” (family).

The Unified Commencement Ceremony took place Saturday, May 20, in the Mercedes-Benz Superdome.

Kidding aside, President Fitts congratulated the graduates on their collective 300,000 hours of service and their fierce desire to live out the Tulane motto, “Not for one’s self, but for one’s own.”

“Don’t be afraid of fear … look fear straightaway in its ugly face, and barge forward.”

“You have learned the lessons of Tulane,” he said. “To serve one another, to bring your minds and your hearts to solving the problems of the world, to look beyond your own perspectives, and to seek out the solutions others miss.”

Corley A. Miller, the class of 2017 student speaker, gave a speech inspired by author Malcolm Gladwell’s 10,000-hour rule, which suggests that 10,000 hours of practice in a field makes a person a master at it. Miller encouraged graduates to use lessons learned at Tulane to shape meaningful life experiences. “Go forward from today knowing that you can be a master of your 10,000 hours, yes, but you can also be the master of the rest of your lives,” Miller said.

Helen Mirren, a Tony, Academy and Emmy Award–winning actress with several humanitarian efforts to her name as well, was the ceremony’s keynote speaker and a crowd favorite as evidenced by the enthusiastic applause and loud cheering.

Her comments were funny, heartwarming and inspirational as she spoke of her love of New Orleans, begged graduates not to procrastinate and listed “Helen’s top five rules for a happy life.”

“No. 4: Don’t be afraid of fear,” she said. “… look fear straightaway in its ugly face, and barge forward. And when you get past it, turn around and give it a good, swift kick in the ass.”

Dr. Michael White’s Original Liberty Jazz Band accompanied two performing parent-and-child combos in honorary degree recipient Marsalis, who played an instrumental rendition of “Do You Know What It Means to Miss New Orleans?” with his father, Ellis; followed by Master of Liberal Arts degree recipient Yolanda Windsay who later sang the vocals of that same song with her mother, featured performer Topsy Chapman.

As is Tulane tradition, at the end of the ceremony the new graduates were sent forth with pyrotechnics and a shower of confetti and streamers to continue pursuing masterful lives.