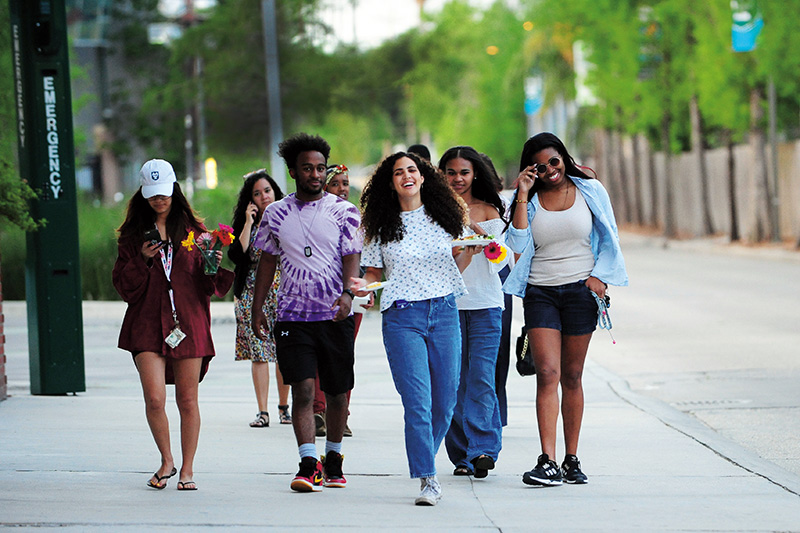 Students stroll to a Posse Scholars’ dinner on the Tulane uptown campus. They attended the event with their mentors on April 13, 2017. (Photo by Cheryl Gerber)

“I was one of them.”
It’s easier to know what a person is going through when you’ve already walked a mile in their shoes.

That’s what makes Satyajit Dattagupta, vice president for enrollment management and dean of undergraduate admission at Tulane, a key, informed component in the university’s effort to diversify its student population.

Dattagupta, who joined Tulane in 2016 to lead the admissions team, grew up in Mumbai, India. He is the product of a middle-class family who depleted their savings to send him to the United States for a college education.

“My dad used his life savings to send me abroad. It was a huge gamble to take all of his livelihood and invest in this confused 17-year-old,” recalls Dattagupta. “But knowing my family’s sacrifice also let me know that I had to do well.”

Dattagupta says he is aware that “knowing the sacrifice” for some students may serve as a motivation to excel, while for others, the sacrifice can feel too great of a burden to place on their families.

To ease the worry of parents and students, Dattagupta often shares his personal story to show that he fully understands their concerns. In fact, his story is one that proves that plans don’t always turn out exactly as they are envisioned.

“I came to the United States to major in computer science. That’s what I received a degree in,” says Dattagupta. “My family expected that I would get a job as a computer programmer, but instead I found a career where I can help match students to the right university.”

This, he does well.

In his first few months at Tulane, Dattagupta made a sweeping change to Tulane’s admission office. He hired a new, fully diverse staff to help with the university’s recruitment of low-income students, first-generation students, students of color and international students.

Since then, there have been new programs put in place to cater to these groups including Bienvenue Tulane, a program that helps potential and admitted students in underserved populations with the cost of airfare for a campus visit.

Diversity at Tulane is a work in progress, but the opportunity for students from underrepresented backgrounds is improving through several new initiatives including those from the Office of Admission and the Center for Academic Equity, which was created to provide guidance for these students from their first day through graduation.

“My dream for admissions is to take away the financial gap between the cost of the university and what students can pay,” says Dattagupta.
Once a student is admitted, the goal is to keep them from changing their minds because of finances.

Last year, Tulane admission saw a jump from 18 percent students of color to 21 percent and an increase from 3 percent enrolled international students to 5 percent.

“We’ve come a long way. But not far enough.”
A 1960s’ picture of Tulane University wasn’t unlike the rest of the Deep South, which at the time was experiencing an uptick in civil rights activity including the desegregation of K-12 schools.

At the collegiate level, the world watched as fatal riots broke out following the attempt of African-American student James Meredith to enroll at the University of Mississippi in September 1962.

The following year, in the spring of 1963, Tulane admitted its first black students, Pearlie Hardin Elloie and Barbara Guillory. [See “The Desegregation of a University,” Tulane, September 2013.]

The two decades that followed ushered in a whirlwind of actions that helped propel the university forward in efforts of diversity.

Carolyn Barber-Pierre, assistant vice president for student affairs, has been instrumental in those efforts since her arrival at the university in 1984 as then director of special services.

“My first set of duties when I arrived at Tulane 34 years ago was to work with minority students, commuter students and those with disabilities,” says Barber-Pierre. “I soon realized that there were no services whatsoever for students of color and other underrepresented populations.”

Eventually, the commuter student population and disability services were divided among other campus divisions, leaving Barber-Pierre to focus on her one true passion—developing services for the growing number of African-American students at Tulane.

Barber-Pierre, with the support of university administrators, helped implement initiatives to increase the number of African-American faculty members at Tulane and introduced a variety of support services for minority students.

Ultimately, the university established the Office of Multicultural Affairs in 1988 with Barber-Pierre at the helm.

“We ask better questions.”
Michael A. Fitts, Tulane’s 15th president, ushered in his tenure with a clear goal and a new momentum for making Tulane a place where all students can feel like they belong.

Through staff changes, including the hiring of Dattagupta as the head of admissions, and the creation of a special task force with a mission to improve diversity, Fitts implemented a new office to address diversity-related issues by approving the creation of the Center for Academic Equity.

Rebecca Mark, Tulane professor of English, and Dusty Porter, vice president for student affairs, served as co-chairs of the President’s Task Force on the Undergraduate Experience. Within the first year of President Fitts’ arrival at Tulane in 2014, he called for the formation of this committee to seek ways to make Tulane more reflective of the local community and the world.

“We had a strong committee of faculty, staff and administrators who met for a few months to come up with recommendations for the president,” says Mark.

During this discovery period, the group concluded that while the university had been actively working to improve the social experience of diverse students through the Office of Multicultural Affairs, there was still more that could be done.

“We had seen the growth of the Posse Foundation, College Track and an increase in the number of students of color, first-generation and LGBTQIA students arriving on campus,” says Mark. “Our recommendation was that there be a center for diversity and inclusion that would support students from an academic standpoint.”

In November 2016, James MacLaren, dean of Newcomb-Tulane College, satisfied the committee’s recommendation by launching the Center for Academic Equity.

In the past year and a half since the center opened, much success has been achieved thanks to the work of senior program coordinator Paula Booke, says Mark.

A research lending library is in place for students to borrow needed supplies for the semester such as textbooks, scientific calculators and computers.

Last summer, students, led by Barber-Pierre, traveled to Senegal, West Africa, for a study abroad program. This summer, a group of students will study in the Dominican Republic.

A scholarship program has also begun to help create a balance between students who are eligible for income- or need–based awards and those who qualify for academic- or merit–based award funding.

“The odds are stacked against them.”
Michael Cunningham, a professor of psychology and Africana Studies at Tulane, has studied the disparities minorities face in education for more than two decades.

As the university proceeds in its efforts to improve the experience of underserved populations, Cunningham says it is important to look to the differences in the students’ experiences even before they step foot on campus.

“Males and females have distinct experiences as will students of different ethnicities,” says Cunningham, who also serves as associate provost of graduate studies.

“Black males have complained that people see them on campus and assume that they are athletes. And while there is nothing wrong with being an athlete, these students are here on academic scholarships and that perception can affect their experience.”

Black females, he says, also have a distinct experience.

“As a racial minority male on this campus I still have male privilege that my female counterparts do not have,” says Cunningham. “Some students are not used to seeing women of color in positions of power. The reality is that some will look at my gender and assume that I’m more qualified based on that alone.”

As an example, Cunningham uses the summer orientation first-year students are invited to attend.

During the summer orientation, students have the opportunity to meet new people, finalize class schedules and become familiar with campus before move-in day in the fall.

Students who may not be able to afford the summer trip as easily as those students from families in a better financial position are already behind the curve of those who can attend. With this in mind, Tulane has expanded its “fly-in” program (Bienvenue Tulane) to provide need-based assistance to students who find it difficult to afford to attend summer orientation.

A welcome weekend for minority students is also in place to allow students of color and other underserved populations an opportunity to visit the university and meet current students who look like them after they’ve been accepted to the university.

Compare this to students who do not have these worries.

“While those students are planning a spring break trip to the beach, other students may be carrying the burden of their families who are looking to them as a means for social mobility,” says Cunningham. “Not only are they in college to better themselves, but they also represent a legacy of struggle.”

“We have more in common than apart.”
On Friday, Dec. 8, 2017, President Michael Fitts announced the public phase of Tulane University’s most ambitious fundraising campaign ever. The goal of raising $1.3 billion was presented with four specific components in mind. Among those goals was to increase opportunity and diversity at the university.

According to Dattagupta, the fundraising associated with the “Only the Audacious” campaign will benefit the admission process exponentially in its efforts to provide more need-based scholarship funding and to assist in bringing students to Tulane to show them in person what the university offers.

The campaign also presents an opportunity for donors to name the Center for Academic Equity, an endeavor that would help enhance the center’s functions and propel the research currently being compiled to the national stage.

The goal is to become a model institution for diversity and inclusion efforts.

“Tulane attracts students from farms and inner cities, from every race and religion. We bring our students together with people they would not otherwise meet from all over the globe. We do this because the world relies on our ability to learn that we have more in common than apart.”

All around town
Safe Schools NOLA offers hope to trauma-exposed students
What is the sound of freedom?
Ahead of the class
Sorting spuds