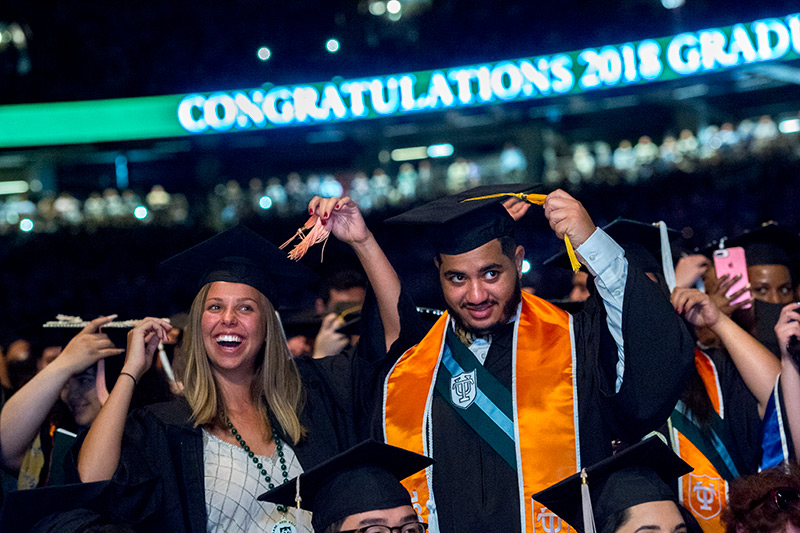 Graduates move their tassels to signify that their degrees are officially conferred. (Photo by Paula Burch-Celentano)

A jubilant atmosphere prevailed as nearly 3,000 Tulane University students convened in the Mercedes-Benz Superdome — many ready to celebrate with flags of home countries, second-line umbrellas and bouquets in hand — on Saturday, May 19, during the Unified Commencement Ceremony.

“Class of 2018, you have a special place in my heart. You were my first class at Tulane.”

Teaching awards that recognize faculty dedication in the classroom went to Laura Rosanne Adderley and Meenakshi Vijayaraghavan, recipients of the Suzanne and Stephen Weiss Presidential Fellowships; and Kerstin Höner zu Bentrup and Marc Zender, recipients of the President’s Awards for Excellence in Graduate and Professional Teaching.

President Mike Fitts warmed up the crowd with a series of “reconsidered” 3 a.m. tweets, offering his late-night musings on Coachella, Juul, Fortnite and Popeyes fried chicken, full of hashtags and social media speak.

Fitts singled out master’s candidate Dr. Adaora Okoli, who graduated with a degree in epidemiology, for turning her own bout with Ebola into a new life purpose. He also credited students with prompting the university to face up to issues of inequality, injustice and violence on-campus.

Fitts noted that the Class of 2018 is the class that was entering the university when he arrived as president four years ago.

“Class of 2018, you have a special place in my heart. You were my first class at Tulane,” he said. “Don’t tell the others — but you are my favorite.”

Danny Sullivan, the Class of 2018 student speaker, said that his Doctor of Medicine degree, conferred on that day, was his fourth Tulane degree over 13 years.

“It’s my sincere wish that the best parts of our years here, whether it be for a one-year master’s or a decades-long PhD, are carried with you for the rest of our life. If your graduation plans include leaving New Orleans, like mine unfortunately do, let us use those fond memories to light the way on our path through that heart of darkness and know that we’ll always have home back here in New Orleans and at Tulane,” Sullivan said, referencing a quote by author John Kennedy Toole on life outside the city.

In her commencement address, Jesmyn Ward, also an associate professor of English on the Tulane faculty, recounted a time when she sought refuge in education and writing, while also viewing it as salvation from her small-town origins.

Instead she found that education was more a process than an achievement, she said.

“Look beyond the horizon, to that which you can’t see but dimly sense in your future: the curving inlet, the sandy beach.

“Know that even those calm waters may harbor boulders, craggy rocks intent on rending the bottom of your boat. That when you land, you may find your legs too weak to walk well, still shaky from the sea, and that the soil may have its own perils, know that this is life. But also know that the fruit on the trees, sweet and warm to the mouth, is life as well.”